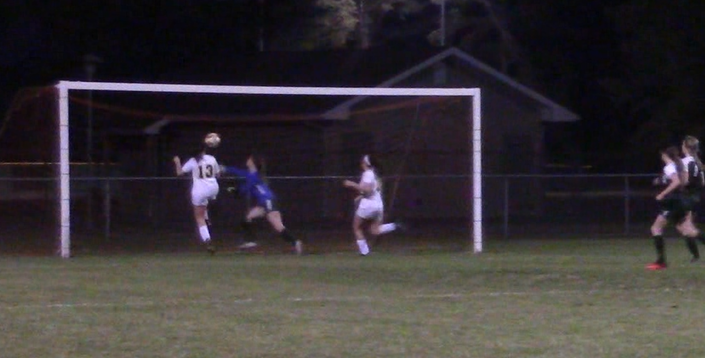 Wednesday, March 4th, your Lady Redskins traveled up to Elizabeth City to take on the Lady Eagles of Northeastern High School. After falling short against a talented Currituck squad in their season opener, Manteo was eager to put one in the win column for their 2020 season.

In the first five minutes of play, Manteo seemed a bit sluggish and on their heels as Northeastern was able to control the ball and keep it down on Manteo’s defensive end. The possession play from Northeastern was sloppy and did not result in any opportunities on goal, but it certainly was not a great way to start the game for the Lady Redskins.

After the first five minutes of play, the midfield trio of Kate Barker, Ayanna Selby, and Libby Robertson started to take control of the ball and got the Redskins going forward into their attacking third by playing quality diagonal balls out wide.

It was at that time, Manteo noticed a weakness in the backline of the Eagles and began to force play down the right flank, targeting Emma Ortega to take on the left-back of the Eagles. Ortega was often able to beat her defender and either get a shot off or play a ball back into the box.

When Ortega was given a spell, Willa Brown was moved from the center to the right-wing to use her pace to get by the outside back. Manteo earned several looks at goal but was unable to capitalize early on until Keylin Zavala took her first shot of the game.

Ortega had worked the ball down the right flank before trying to cross the ball into the top of the box. The Eagles center-back deflected the ball back wide and Ortega fought off two defenders to win the ball back, turn and drop it to Zavala. Zavala took a touch towards goal before fancying a shot from outside the 18-yard box. It was a high and curling shot that danced above the goalie’s out-stretched hand and quickly dropped into the goal to give Manteo a 1-0 lead.

Manteo began to settle in with more possession after the first goal but the overall play itself from both teams was rather slow-paced. The high and thick grass of the Northeastern soccer field slows the ball down quite a bit, resulting in a derogatory effect on the pace of the game.

The Lady Redskins kept the Eagles attack at bay for the most part in the first half, only allowing one shot that was off target. The Redskins’ attack piled up the chances but numerous chances were negated due to being offsides.

Manteo had control over the game and shuffled players around in their formation. Cora Sutherland came in to play the left-back position to allow Ragen Twiford to move forward on the wing. Twiford was able to net Manteo’s second goal of the game before the first half ended.

The goal began with a hard and low cross driven from the right-wing by Ortega. The ball found Twiford on the far post. Twiford’s initial shot was deflected back to her by the defender but she stuck with it and got off a second attempt just before the goalie could rush out and collect the ball. Twiford’s shot clanked off the inside of the near post, across the goal and into the side netting of the far post to give Manteo a 2-0 lead.

Halftime came and Manteo was pleased with a 2-0 lead, but they knew they could be doing much better as well. During the halftime talk, veteran players expressed the need to play harder and not to play down to the level of the other team.

The intensity of the second half was better overall. The Lady Redskins stopped hesitating on 50/50 balls and went hard for the ball.

Manteo looked to build upon their lead ten minutes into the second half when Brown played a nice low ball across the box to find Ortega on the far post. Ortega made quality touches around a crowed box to get a shot off towards the far post. Esmerelda Vasquez-Mendez made a hard run in on the ball as the goalkeeper made a diving save. The keeper was able to corral the ball just before Vasquez-Mendez could get a touch on the ball to knock it over the goal line.

Five minutes later, Twiford would net her second goal of the game to put the game in complete control of the Redskins. Robertson drilled a long cross from the right flank into the six-yard box. The keeper rose up in an attempt to catch it, but the ball deflected off her fingertips and behind her towards the goal. As the ball bounced towards the goal, both Twiford and the keeper raced for the ball. Twiford was able to get the first touch on the ball with her head, knocking it into the net along with herself and the keeper.

A handball in the box by a Northeastern defender gave the Redskins a penalty kick. Robertson was selected to take the kick and tucked the ball into the lower right-hand corner with great poise.

Leading 4-0, the Lady Redskins continued to control the game while rotating all personnel. While Brown and Robertson remained on the pitch, they took advantage of a high defensive line as Brown played Robertson through behind the line. Robertson’s well-timed run gave her the step on the center-back but soon found the defender shoulder to shoulder with her. Robertson opted for an early shot from 25 yards out. It was a brilliant shot that rocketed past the keeper and into the right-side top bin.

The game would end with a 5-0 scoreline in favor of Manteo.

Coach Cleaver stated after the game, “It’s always great to get a big win on the road, especially against a solid team. This is a tough field to play on as it is vastly different from our pitch and slows the game down tremendously. All five goals were high-quality finishes.”

Ragen Twiford: 2 goals and Player of The Match